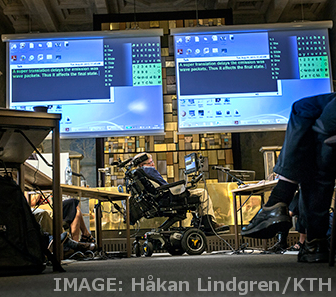 Stephen Hawking has laid down his latest ideas on the nature of black holes.

He spoke at the Hawking Radiation conference being held at KTH Royal Institute of Technology in Sweden, and made some surprising new claims.

He said it is possible that black holes do not actually swallow and destroy physical information, but instead they store it in a two-dimensional hologram.

A major question facing the current generation of physicists is; ‘What happens to the information about the physical state of things that are swallowed up by black holes?’.

Our understanding of general relativity would suggest it is destroyed, but that would violate the laws of quantum mechanics.

Hawking has now presented and idea about how the paradox can be solved, and how information could be preserved if it is sucked in.

As far as we know, everything is encoded with quantum mechanical information, which it is supposed should never entirely disappear, even if it gets sucked into a black hole.

Hawking has proposed that the information may not be drawn into the black hole at all.

He says it could be permanently encoded in a 2D hologram at the surface of the black hole's event horizon - the field that represents a black hole’s point of no return.

“The information is not stored in the interior of the black hole as one might expect, but in its boundary — the event horizon,” he said.

Hawking said the information could be stored in the form of ‘super translations’.

“The idea is the super translations are a hologram of the ingoing particles,” Hawking said.

“Thus they contain all the information that would otherwise be lost.”

He said that the information is emitted in quantum fluctuations from black holes, but in a “chaotic, useless form”.

“For all practical purposes the information is lost.”

But in a lecture the night before, Hawking offered some exciting thoughts about where things that fall into a black hole could end up.

“The existence of alternative histories with black holes suggests this might be possible,” Hawking said.

“The hole would need to be large and if it was rotating it might have a passage to another universe. But you couldn't come back to our universe.

“So although I'm keen on space flight, I'm not going to try that.”