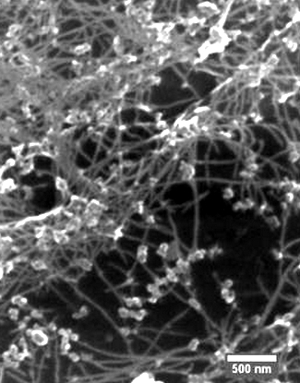 Researchers have developed a new ultracapacitor that is both high performance and low cost.

Ultracapacitors are energy storage devices on an entirely new level. They can store vast amounts of energy and release it in a rapid surge of power.

They have potential applications in almost every electronic device.

The newest ultracapacitors are made by mixing graphene flakes with single-walled carbon nanotubes, combining two carbon nanostructures with complementary properties.

Single-walled carbon nanotubes and graphene have unique and exciting electronic, thermal, and mechanical properties. They are the most attractive materials for designing new ultracapacitors, said Jian Li, first author on a new paper.

Plenty of research has explored the separate use of the two materials, but now they are realising the broad benefits of combining them, he says.

“In our lab we developed an approach by which we can obtain both single-walled carbon nanotubes and graphene, so we came up with the idea to take advantage of the two promising carbon nanomaterials together,” said fellow researcher Michael Keidar, a professor of aerospace engineering.

The researchers combined graphene flakes and nanotubes by using an electric arc to vaporise a hollow graphite rod filled with metallic catalyst powder.

They mixed the resulting two nanostructures together into an ink-like paste which could be rolled onto paper, a common separator for current capacitors.

The specific capacitance of the hybrid device - a measurement of the performance of a capacitor per unit of weight - was three times higher than similar devices made from carbon nanotubes alone.

The graphene flakes provide much greater surface area and good in-plane conductivity, while the carbon nanotubes connect all of the structures to form a uniform network.

The research team says other types of ultracapacitors have achieved high specific capacitance ratings, but the combination approach can do it for a much lower cost, as the team has also developed a simple way to manufacture large amounts of the mix.

More details of the hybrid ultracapacitors are available in the full report.