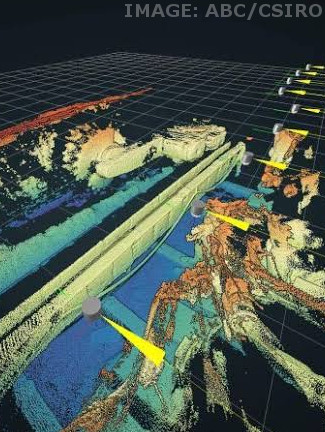 CSIRO engineers have developed a new scanning device that can give a full panoramic view of an underground coal mine.

The device, called ExScan, could allow the miners to manage longwall mining operations remotely, safe in a control centre above ground.

The ExScan takes a full 3D scan or its environment and transmits it through using wi-fi and optic fibre from the coal face to the surface, some 300 to 400 metres above.

This type of “intelligent mining” approach is being trialled by Glencore at its Oaky Creek mine site in Queensland.

Glencore currently has 16 ExScans underground, but has plans to set up dozens more.

The coal-mining industry has been plagued with safety issues, including the emergence of black lung disease, but is worth about $7 billion to Australia's export income every year.

“What you can see here is the penultimate stage, we are almost there. We are a few steps away from actually being able to remove the people from the coal face,” he told the ABC.

The advancement comes after years of research at CSIRO's Centre for Advanced Technologies in Brisbane.

ExScan has undergone dozens of explosion tests as part of its certification, showing it can operate in the harsh underground environment.

When a full scale system is set up, with 10,000 tonnes of fully-automated equipment hundreds of metres underground, it could be considered one of the biggest robots in the world.

Glencore says no one will lose their jobs when the system goes “live”, as humans will be needed for maintenance programs.

More information and footage of the tests is accessible here.