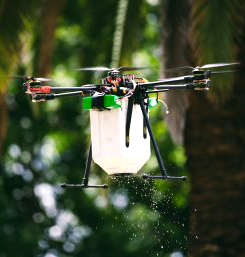 Scientists are testing a drone that drops beneficial insects onto crops.

Mr Godfrey investigated whether drones could be used to spread the beneficial Californicus mite onto crops infected with two spotted mites.

“As corn grows, it is very difficult to walk between the crop to spread beneficial bugs,” he said.

“A drone flying over the crop and distributing the insects from above is a much more efficient and cost-effective method.

“I built a specific drone for the project, tailoring the number of propellers, stand, and size of the motor to suit the drone’s application.

“My initial concept for the ‘Bug Drone’ came from a seed spreader, and in the end I built an attachment to the drone that can be used to spread the mites over the crop from the air,” he said.

Initial designs using a cylinder-shaped container to hold the mites were not practical, as they could not hold enough of the predatory mites to make the process efficient.

“The seed spreader then acts as the distributer as it has a small motor powering it.”

The device is controlled remotely from the ground.

“We’ve tested the product ... and I’ve successfully proved the concept that drones can be used to spread beneficial bugs,” Mr Godfrey said.

“There is still a lot of work to be done, but the most difficult part is to work out how to control the volume of bugs being distributed at the one time.

“The next step is to monitor the crops and to see what happens after the bugs have been dropped.

“Remote sensing with precision agriculture is an interesting field, and it has opened my eyes to the career opportunities in this field,” he said.