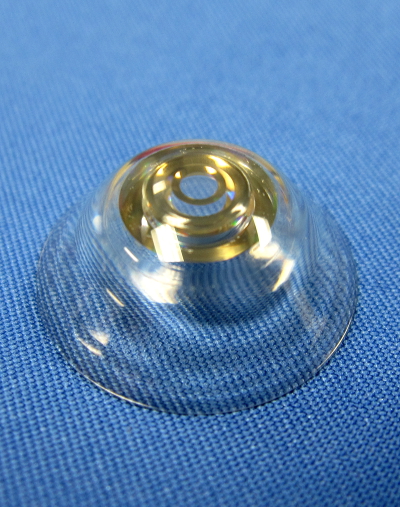 EPFL’s Eric Tremblay says the new prototype of his telescopic contact lens - the first of its kind – gives hope for better, stronger vision for the 285 million people that are visually impaired worldwide.

The optics specialist also unveiled a set of complementary smart glasses that recognise winks and ignore blinks, which are used to control the modes of the contact lens.

It would allow wearers to switch between normal and magnified vision in the wink of an eye.

The contacts work by incorporating a very thin reflective telescope inside a 1.55mm thick lens.

Small mirrors inside bounce light around, expanding the perceived size of objects and magnifying the view, just like looking through low magnification binoculars.

The final lenses are made from several precision cut and carefully assembled pieces of plastics, aluminium mirrors, and polarising thin films, along with biologically safe glues.

The researchers have also developed a novel method to switch the wearer’s view between normal, or unmagnified vision and telescopic.

To achieve this, they created electronic glasses that use a small light source and light detector to recognise winks and ignore blinks.

The wearer can wink their right eye for magnification, and left eye for normal vision.

The switch works by electronically selecting a polarisation of light to reach the contact lens.