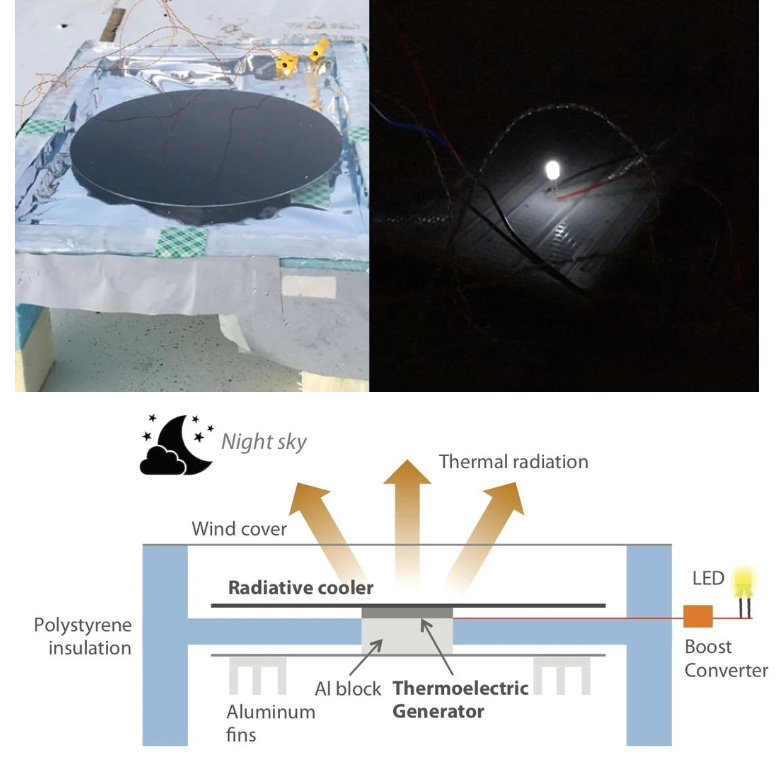 Research engineers have come up with a cheap, thermoelectric device that harnesses the cold of space to generate electricity.

“Remarkably, the device is able to generate electricity at night, when solar cells don't work,” says lead author Aaswath Raman, an assistant professor of materials science and engineering at UCLA.

The device takes advantage of radiative cooling, where a sky-facing surface passes its heat into the atmosphere, losing some heat to space and reaching a cooler temperature than the surrounding air.

This phenomenon explains how frost forms on grass during above-freezing nights, and the same principle can be used to generate electricity, harnessing temperature differences to produce renewable electricity at night, when lighting demand peaks.

The low-cost thermoelectric generator was tested on a rooftop in Stanford, California, under a clear December sky.

The device, which consists of a polystyrene enclosure covered in aluminised mylar to minimise thermal radiation and protected by an infrared-transparent wind cover, sat on a table one metre above roof level, drawing heat from the surrounding air and releasing it into the night sky through a simple black emitter.

When the thermoelectric module was connected to a voltage boost convertor and a white LED, the researchers observed that it passively powered the light.

They further measured its power output over six hours, finding that it generated as much as 25 milliwatts of energy per square meter.

The radiative cooler consists of a simple aluminium disk coated in paint, and all other components can be purchased off the shelf, so the research team believes the device can be easily scaled for practical use.

The experts also say their device can become massively more efficient through improved engineering - such as by suppressing heat gain in the radiative cooling component to increase heat-exchange efficiency - and operation in a hotter, drier climate.