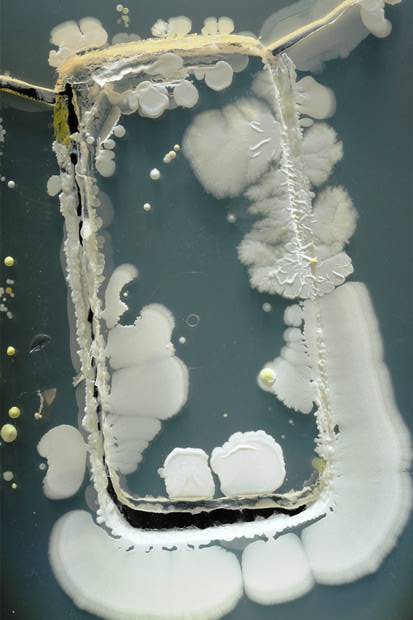 A casual glance at nearly anyone’s mobile shows that smartphone screens are pretty unclean, but a new study has magnified the grossness in the name of science.

Researcher Simon Park – a senior lecturer in molecular bacteriology at the University of Surry in the UK - had students in his biomedical bacteriology undergraduate course to imprint their smartphones onto bacteriological growth Petri dishes.

This prompted the growth of small colonies, to show what life the innocuous surfaces might harbour.

The test revealed a microcosm of bacteria – a mix of those usually found from our various orifices and the environment around us.

“The ecological niche on the body for Staphylococcus aureus is the nostrils, so a furtive pick of the nose, and quick text after, and you end up with this pathogen on your smartphone,” he told The Huffington Post.

“From these results, it seems that the mobile phone doesn’t just remember telephone numbers, but also harbours a history of our personal and physical contacts such as other people, soil and other matter.”

Dr Simon Park advised users to clean their devices with disinfectant every week in order to prevent the build up of bacteria.