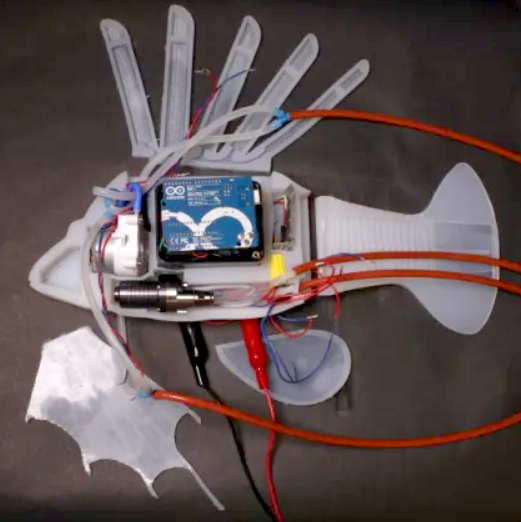 US engineers have created a squishy robotic lionfish that has synthetic liquid 'blood' made of battery fluid.

The fish, developed at Cornell University in the US, was designed to demonstrate advances in energy storage, efficiency and autonomy in robots.

It is capable of swimming upstream and fanning its fins, using battery fluid to power onboard pumps and electronics, as well as mechanically driving the robot, allowing it to swim for 36 hours between charges.

Robots are typically composed of isolated systems required for specific tasks. For example, a material may function solely as the battery, but this means that scaling up the system requires additional battery packs, which increases weight, and modifications may be required to maintain the performance of the robot.

One solution to this issue is to use batteries that serve multiple functions.

Cornell’s Dr Robert Shepherd and colleagues have identified hydraulic fluids used in robots for force transmission as also having the potential for energy storage.

The authors created a synthetic vascular system, embedded in a lionfish-inspired robotic fish, made of interconnected zinc iodide flow-cell batteries that contain a liquid electrolyte.

The liquid is circulated around the robot, powering the onboard pumps and electronics through electrochemical reactions. Simultaneously, the pumping of the liquid transmits mechanical force to the fins, allowing the robot to swim.

In tests, the robot was able to swim for long durations (with a maximum theoretical operating time of over 36 hours) and at a speed of more than 1.5 body lengths per minute against a current.

More details are available here, and a video demonstration can be seen below.