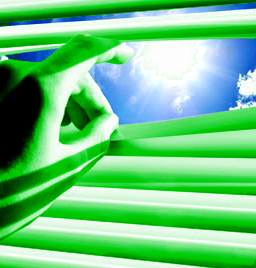 Entrants in the 2014 Solar Decathlon Europe have shown what the energy-conscious house of the future may include.

The solar-powered Techstyle Haus is getting a lot of attention, with roof and walls made of high performance textiles and implanted with almost any kind of green device imaginable.

Techstyle Haus was designed and built by students from the US and Germany. It features about 5 kilowatts of flexible solar panel skin, which generate more power than the building requires.

Its coating of monocrystalline PV cells are laminated onto vinyl fabric, and even the stylish curvature of house is designed to allow maximum solar exposure.

The team have managed to come in under the Passive House Standard; which reuiqres a house to use 90 per cent less energy for heating and cooling than a standard home.

“If someone had told me two years ago that students could design and build a home out of fabric that produces over 50% more energy than it uses I would not have believed it. I think we have all surprised ourselves and our communities,” said Helen Bergstrom, chemical engineering student and project engineer from Brown University.

Following the 2014 Solar Decathlon in July, Techstyle Haus will be more permanently set up and monitored to test its performance and viability.

More details in the following video.