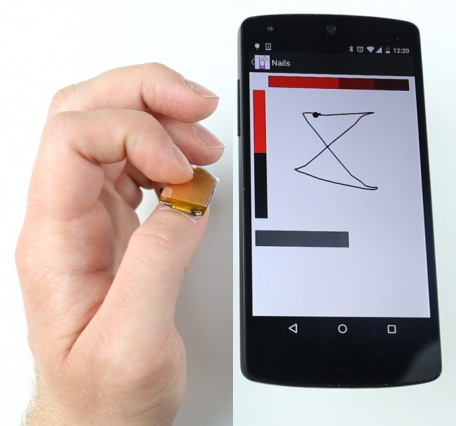 Researchers at MIT are developing a new wearable device that turns the user’s thumbnail into a miniature wireless track pad.

The technology could let users control devices when their hands are full — answering the phone while cooking, for instance.

It could even enable subtle communication in circumstances that require it, such as sending a quick text to a child while attending an important meeting.

The engineers say their prototype of the device, called NailO, will be presented next week at a computer-human interaction conference in South Korea.

As a site for wearable input device, the thumbnail has a number of advantages.

It is a hard surface with no nerve endings, so a device affixed to it does not impair movement or cause discomfort.

The thumbnail easily accessed by the other fingers as well, even when the user is holding something in their hand.

“When I put this on, it becomes part of my body. I have the power to take it off, so it still gives you control over it. But it allows this very close connection to your body.”

To build their prototype, the researchers needed to find a way to pack capacitive sensors, a battery, and three separate chips - a microcontroller, a Bluetooth radio chip, and a capacitive-sensing chip - into a space no larger than a thumbnail.

“The hardest part was probably the antenna design,” says Artem Dementyev, a graduate student in media arts and sciences and the paper’s other lead author.

“You have to put the antenna far enough away from the chips so that it doesn’t interfere with them.”

For their initial prototype, the researchers built their sensors by printing copper electrodes on sheets of flexible polyester, which allowed them to experiment with a range of different electrode layouts.

The next step will be to create a custom chip featuring all of the functions in an even smaller footprint.

“Is it the case that we’ll all be walking around with digital fingernails in five years’ time?” asks Steve Hodges, leader of the Sensors and Devices group at Microsoft Research in the UK.

“Maybe it is. Most likely, we’ll have a little ecosystem of these input devices. Some will be audio based, which is completely hands free.

“But there are a lot of cases where that’s not going to be appropriate.

“NailO is interesting because it’s thinking about much more subtle interactions, where gestures or speech input are socially awkward,” he said.