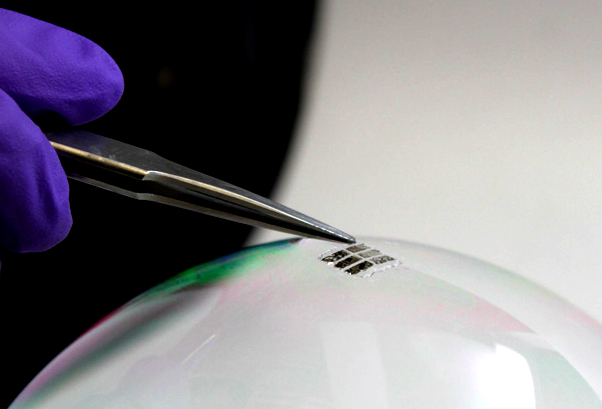 Researchers have demonstrated the thinnest, lightest solar cells ever produced.

They are so thin that engineers at MIT were able to drape a working solar cell across the surface of a bubble without it bursting.

The team says the super-thin cells could be placed on almost any material or surface, including a hat, shirt, or smartphone, or even on a sheet of paper or a balloon.

Though it may take years to develop into a commercial product, the laboratory proof-of-concept shows a new approach to making solar cells that could help power the next generation of portable electronic devices.

The key to the new approach is to make the solar cell, the substrate that supports it, and a protective over-coating to shield it from the environment, all in one process.

The substrate is made in place and never needs to be handled, cleaned, or removed from the vacuum during fabrication. This minimises exposure to dust or other contaminants that could degrade the cell’s performance.

“The innovative step is the realisation that you can grow the substrate at the same time as you grow the device,” says research leader Dr Vladimir Bulović, MIT’s associate dean for innovation.

Their latest update is available in a report published in the journal Organic Electronics.

For the latest proof-of-concept, the team used a common flexible polymer called parylene as both the substrate and the overcoating, and an organic material called DBP as the primary light-absorbing layer.

The entire process takes place in a vacuum chamber at room temperature and without the use of any solvents, unlike conventional solar-cell manufacturing, which requires high temperatures and harsh chemicals.

In this case, both the substrate and the solar cell are “grown” using vapour deposition techniques.

The team says this particular choice of materials was just an example, and that many different materials could be used for the various layers.

“We put our [glass] carrier in a vacuum system, then we deposit everything else on top of it, and then peel the whole thing off,” explains research scientist Annie Wang.

Bulović says that like most new inventions, it all sounds very simple, but actually developing the techniques to make the process work required years of effort.

The solar cell in the demonstration device is not especially efficient, but because of its low weight, its power-to-weight ratio is among the highest ever achieved.

Whereas a typical silicon-based solar module, whose weight is dominated by a glass cover, may produce about 15 watts of power per kilogram of weight, the new cells have already demonstrated an output of 6 watts per gram — about 400 times higher.

“It could be so light that you don’t even know it’s there, on your shirt or on your notebook,” Bulović says.

“These cells could simply be an add-on to existing structures.”

“This demonstration by the MIT team is almost an order of magnitude thinner and lighter” than the previous record holder, says Max Shtein, an associate professor of materials science and engineering, chemical engineering, and applied physics, at the University of Michigan, who was not involved in this work.

As a result, he says, it “has tremendous implications for maximizing power-to-weight, and for the ability to simply laminate photovoltaic cells onto existing structures.”

And, he says; “the overall recipe is simple enough that I could see scale-up as possible.”