Penetrating view sees its way to US hands 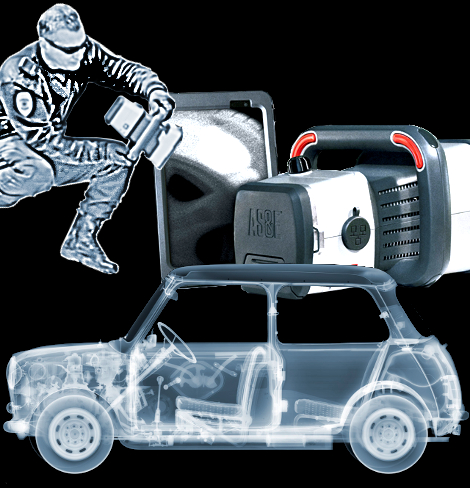 It appears that the US Army may soon wield a handheld X-Ray gun, lifting yet another idea from the pages of science fiction.

United States military engineers have demonstrated a device which can see through fabric, rubber and aluminium to find drugs, money, explosive liquids and even people.

The gun is believed to be the first of its kind, revealing hidden world with the press of a button.

The user can see the outline of organic material buried behind cloth, leather or thin aluminium by running the X-ray gun over the surface in question.

Defence industry journalists in the US have been allowed into an exclusive demonstration, where they saw the device used to see through boxes, bags, car seats and plane wings to reveal organic compounds from bricks of simulated cocaine to paper, ammonia and other potentially explosive materials, even a handful of grapes.

“Representatives from American Science and Engineering, or AS&E would run the X-ray scanner, called the MINI Z, over the item and the image would show up on a Windows powered tablet PC,” tech writer Patrick Tucker says.

“The same company makes the large, toll-both like backscatter X-rays scanners you walk through at airports – the ones that have given rise to recent controversy because of the embarrassing amount of detail they reveal about a person’s body.

“They work in almost the same way as regular X-rays. When you go to a doctor’s office with a possible broken rib, the doctor will shoot a high-powered beam of photons through your body.

“The photons pass through the soft tissue to a film, which is then developed to reveal fractures, car keys, staples or other abnormalities. The photons get hung up on the parts of you that are more atomically dense, like bones or metallic objects,” Tucker said.

Backscatter X-Rays are considered safer as they do not penetrate organic material, but instead an image is formed when the photons of the beam hit the surface of organic material and ricochet back.

The MINI Z gun allows for quick, multiple scans from different angles by taking several swipes with the scanner.

The MINI Z is expected to form an attractive new security capability for the United States’ arsenal, coming in at about $US50,000 per unit.

Its most important feature from a national security perspective is the simplicity of use.

As the MINI Z requires almost no training to operate, U.S. soldiers will be able to use it as easily as foreign soldiers under U.S. tutelage.