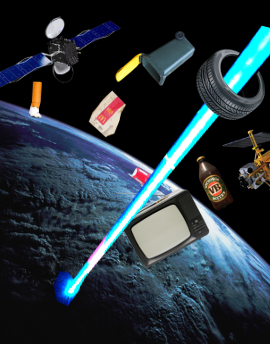 European scientists have figured out how to track space junk continuously.

Previously, the world could only track the junk for a few hours every day because the existing system only worked when the debris was illuminated by the sun, and the tracking station on Earth was in darkness.

But space debris laser ranging can now be performed during daylight hours.

The findings of a new study greatly increase the period over which this technique can be used to track space debris in order to avoid collisions, from a few hours to most of the day.

Defunct satellites and rocket bodies in Earth’s orbit constitute space debris and increasing numbers of these are a threat to active satellites.

Space debris laser ranging is used to measure the distance to these objects, which can then be used to help avoid damage to satellites and spacecraft.

However, this method has only been possible for a few hours around twilight, when the satellite laser ranging station on Earth is in darkness and the debris is still illuminated by the Sun.

Now, researchers have combined a telescope, detector and filter to increase the contrast of objects with respect to the daylight sky.

They also developed real-time target detection software that calculates the target-prediction offset, which is then used to correct inaccurate predictions.

The authors demonstrate that daylight space debris laser ranging is possible and would increase the potential observation times for all satellite laser ranging stations.

They suggest that observation times at the space laser ranging station in Graz, Austria could increase from 6 to 22 hours a day, depending on the season.